Discuss hardware related to the VESC such as the NRF nunchuk.
Post Reply
77 posts 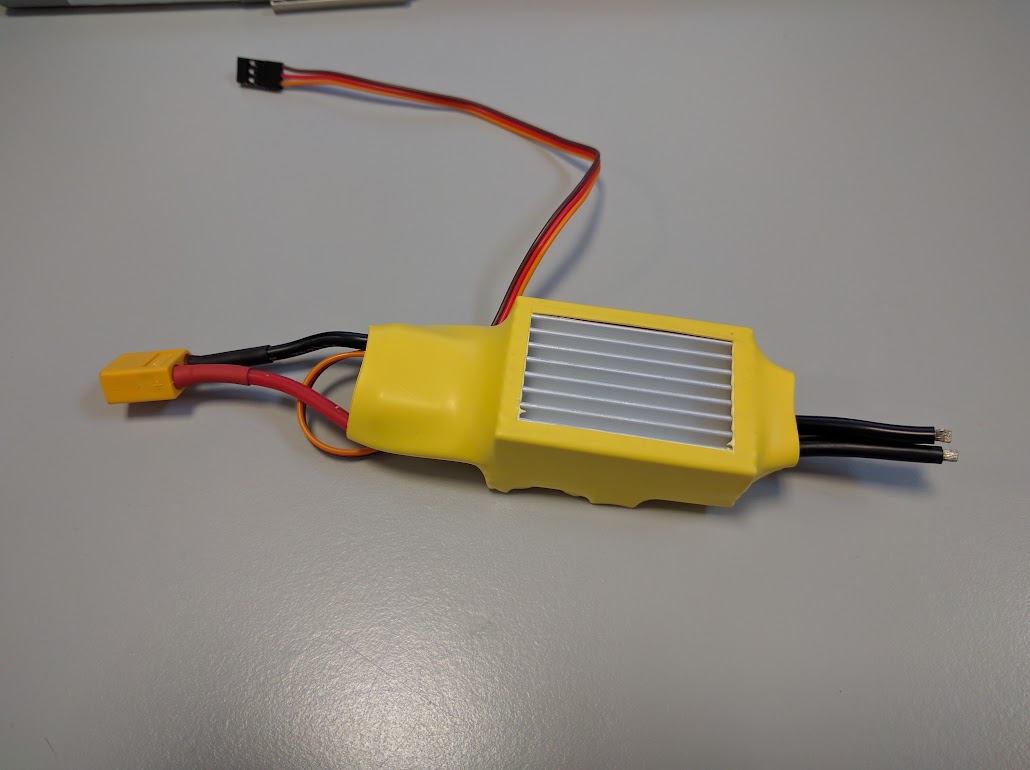 It's made of 2 PCBs, a logic one with the STM32F405 and DRV8302 and a power one with the 6 MOSFETs and 2 sense resistors. I figured that its improved hardware design could handle more current. I was not quite right: 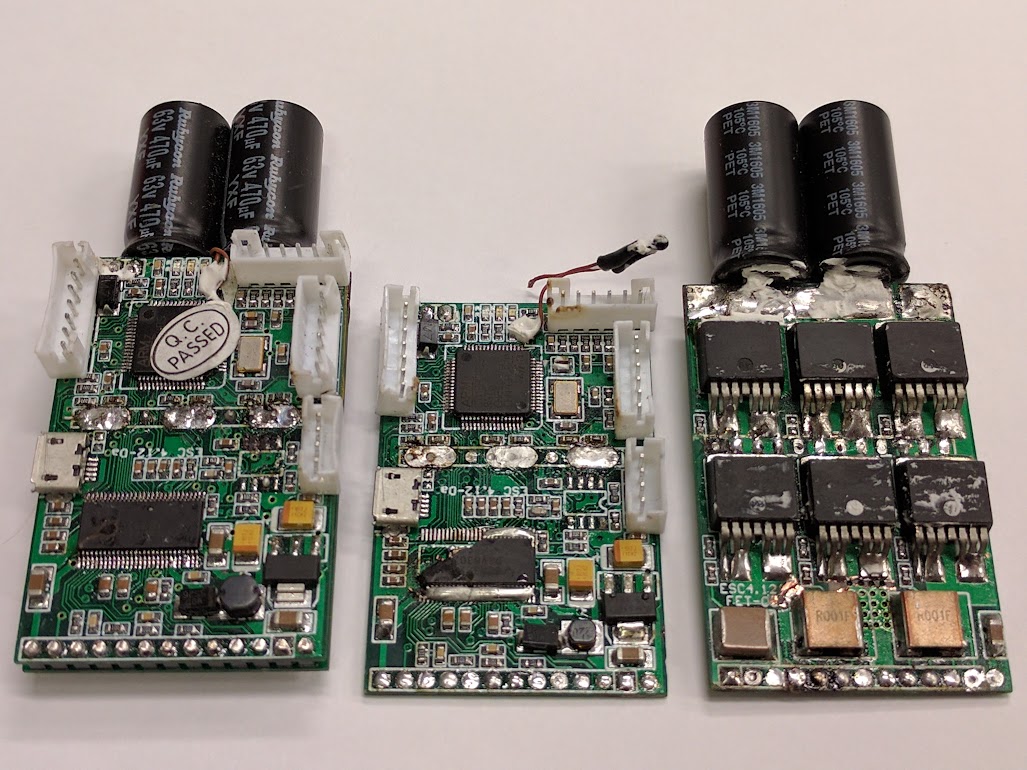 So eventually I figured I'd have to design my own. I decided to keep the logic and power sides separate. As I wanted to drive much larger MOSFETs I am using dedicated MOSFET drivers capable of driving 4Amps instead of the DRV8302. I also wanted to upgrade the power sensors to ACS758s. So here's my version of the VESC, largely copied from the v4.12 schematic: 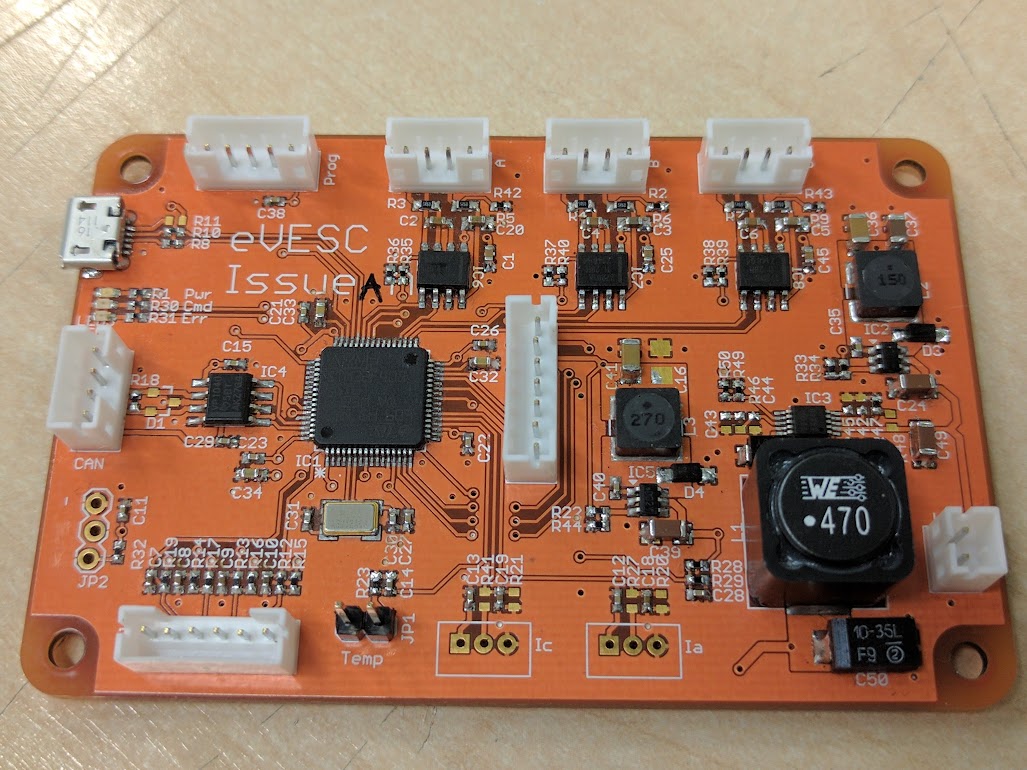 I've not quite finished soldering it up, the example circuit for power supplies used 5.13k resistors, who even sells them? I'll post up a picture of the working board once I've done that and had a go at programming it.

The power stage will be quite odd to most people. I'm taking some inspiration from this post on Endless Sphere: https://endless-sphere.com/forums/viewt ... 41#p828490 and he's a preview of what's to come: 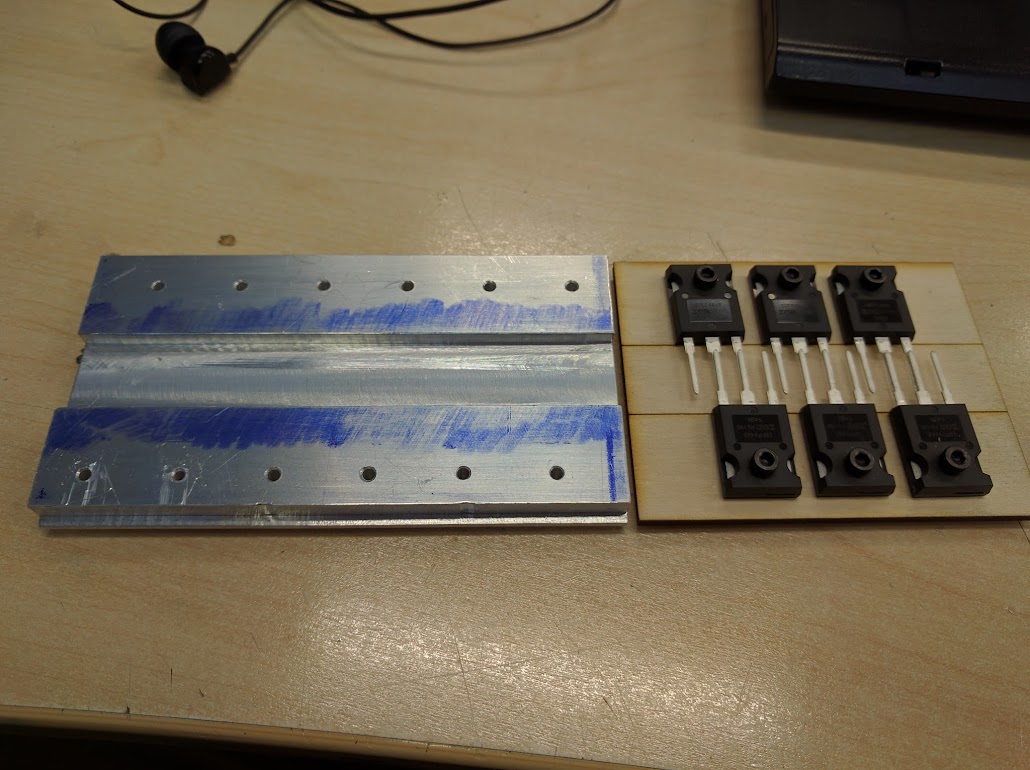 Hi, sounds like an interesting variant of the VESC! But there seems to be something wrong with the pictures in your post: I can only see the first one (and the rest just shows the text "Image" instead of the actual image)?
Top

Ahah! Fixed it, alas Google Photos can be funny some times.
Top

I'm not sure if that will be able to switch quickly enough, possibly it will work at 10khz or lower. At high frequencies a 20mm trace length between driver and mosfet gate is considered long.
Top

I guess you are measuring phase currents directly with the ACS sensors (and not bottom legs currents as with the shunts) ?
Maybe you want to implement 3 shunts, so you can be compatible with the future release of Vesc ? But I fear your board has provision for only 2 ACS sensors.
Most likely you can invert the reading in the firmware if needed by simply having a negative gain for current measurement in your hardware config file. (I did not check, but if it does'nt work, sure it can be solved).

Your board looks nice. Is it a 2 sides board only ? Will you make it public ?
Top

I think it is a better idea to use ACS758 sensors on the phase currents, because otherwise, the response time of the current sensor might be too long to get clean and accurate measurements upon low duty PWMs. The datasheet says 3us rise time (IPstep = 60% of IP+, 10% to 90% rise time), but this leave quite a large error and on similar projects, I've had measurements where ACS would react even slower (at least don't expect it to be better than the datasheet statement).
I am not 100% sure, but it seems to me that the V4 code should also work with 2 motor phase measurements instead of on Fets leg. If not, I am interested to rework the code for this (although the timer/adc acquisition is the part I am least familiar with).

Again, your version is very interesting: no more DRV8032, low cost pcb, easy to repair, good cooling of fets, 13s batteries or more...
Question remains on the reliability with all these wires (to the Fets and current sensors) and how to make the Fets wirings short and easy to make (such as the "Lebowski busbar" implementation that you linked for instance.
Top
Post Reply
[phpBB Debug] PHP Warning: in file [ROOT]/vendor/twig/twig/lib/Twig/Extension/Core.php on line 1236: count(): Parameter must be an array or an object that implements Countable